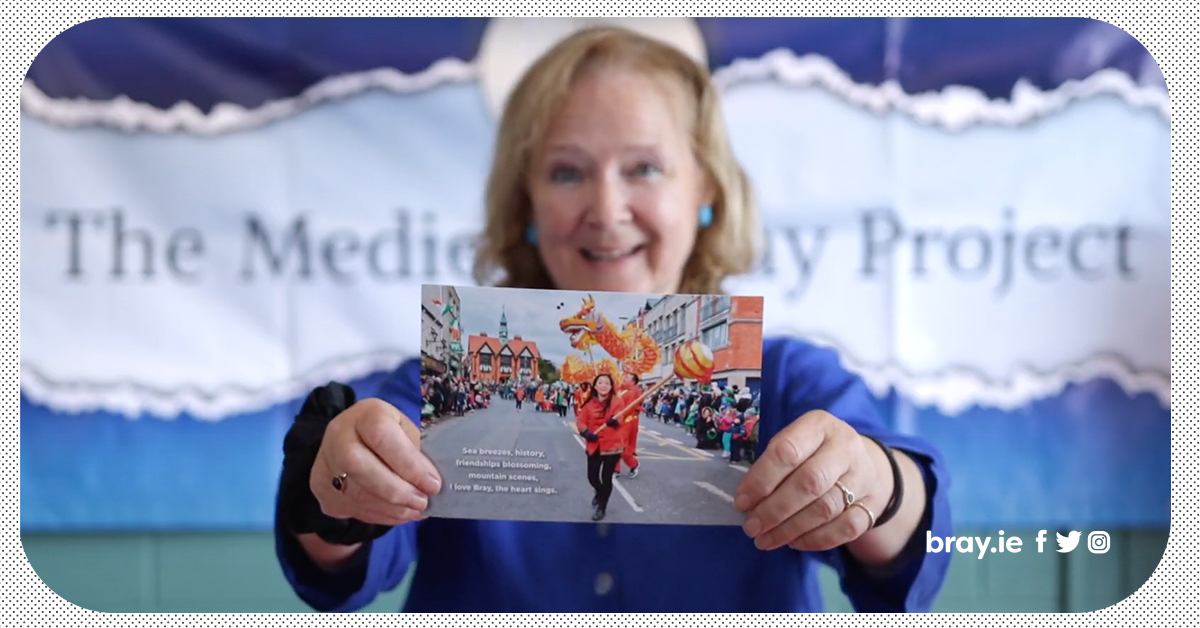 The Medieval Bray Project recently invited members of the community of Bray to put forward a photograph depicting an aspect of Bray’s heritage with the objective of creating a postcard under the theme of Daoine agus Áit (People and Place) part of the Connecting our Communities Heritage Postcard Project and showcased during Heritage Week 2021.

Watch a video about the project:

Background to the project

The image portrays an aspect of what we think makes Bray’s heritage unique and how it connects the community.  Iconic photographs of Bray have been posted to Bray.ie, Bray Open Forum and other Bray Groups have hit a chord with large sections of the Bray community we have chosen one of these.  Two of  Bray’s annual main events are the St. Patrick’s day parade and the Airshow.  The Medieval Bray Project has chosen a brightly coloured and uplifting scene from a St. Patrick’s day parade not too long ago, reminding us of when we could celebrate together and giving us hope that our strong, active and diverse community can and will celebrate together again.

The postcard is one of a collection produced by members of the Irish Community Archive Network (iCAN) which The Medieval Bray Project joined in 2019, which is an initiative of the National Museum of Ireland and Wicklow Heritage Office that supports community groups in collecting, preserving and sharing their local history and heritage online.

Representatives of The Medieval Bray Project and members of two other groups from Bray attended workshops with other iCAN Heritage Communities throughout Ireland and it was through that process one photograph was selected for the Postcard.

This postcard which was taken by Joe Keogh was entered by Bray Chamber and bray.ie.

Two other photographs of finalists are shown here, one taken by local wildlife specialist Justin Ivory, depicting some dolphins playing in Dalkey Bay and another showing a Bray group called Sanctuary Runners, having fun after a run which is held each Saturday outside the Esplanade Hotel at 09.30 am. If you’re interested in joining please register online with Bray Sanctuary Runners.

The postcard is A5 in size (which is half A4). It will be distributed to community groups, libraries, arts groups, nursing homes and other outlets. Queries to Mary at +353872104844.

A big thanks to the Medieval Bray Project team who coordinated the project.


We use cookies on our website to give you the most relevant experience by remembering your preferences and repeat visits. By clicking “Accept”, you consent to the use of ALL the cookies.

Functional
Functional cookies help to perform certain functionalities like sharing the content of the website on social media platforms, collect feedbacks, and other third-party features.
Performance
Performance cookies are used to understand and analyze the key performance indexes of the website which helps in delivering a better user experience for the visitors.
Analytics
Analytical cookies are used to understand how visitors interact with the website. These cookies help provide information on metrics the number of visitors, bounce rate, traffic source, etc.
Advertisement
Advertisement cookies are used to provide visitors with relevant ads and marketing campaigns. These cookies track visitors across websites and collect information to provide customized ads.
Others
Other uncategorized cookies are those that are being analyzed and have not been classified into a category as yet.
Necessary Always Enabled
Necessary cookies are absolutely essential for the website to function properly. This category only includes cookies that ensures basic functionalities and security features of the website. These cookies do not store any personal information.
SAVE & ACCEPT
Powered by